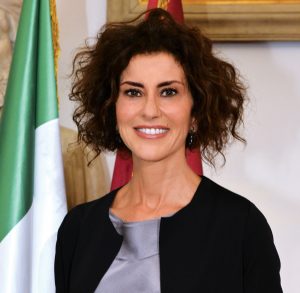 Italian, graduated in Law, speaks fluent English, French and Spanish. She has a daughter. In 1985 she began her entrepreneurial activity in Todini Costruzioni Generali within the Human Resources Dep.t, then creating and heading the in-house law department. She co-operated in late 1980’s with Compagnie Générale des Eaux. She was Member of the European Parliament between 1994 and 1999. She was Member of the European Parliament between 1994 and 1999, Board Member of LUISS Guido Carli University representing the Ministry of Education, University and Research (2004-06), IPI – Institute for Industrial Promotion Vice- President, owned by Ministry of Finance (2008-10), President of FIEC – European Contractors Industry Federation (2010-12), Board Director of RAI – Italian Broadcasting Television (July 2012 – November 2014), Chairman of Poste Italiane (May 2014 – April 2017).

She is owner and Chair of the  Company Todini Finanziaria Srl. She is Chair of Green Arrow Capital SGR

– SAMOTER 2011 International Prize – to Todini S.p.A. for its contribution to innovation in the construction industry

– Codacons award “Friend of Consumer” 2012, “for her significant contribution to Italy’s image” as President of Com. Leonardo