The Astaldi group, chaired by Paolo Astaldi, is one of the leading international companies in the field of design, construction and management of public infrastructure and large civil engineering projects, focusing on transport infrastructure, power plants, civil and industrial construction, plant engineering, Operations & Maintenance. The Group was founded in 1922 and ranks among the top 50 international contractors in the world today – and among the top 20 in Europe – boasting a consolidated leadership both in Italy and abroad. It can count on an order book worth in excess of 27 billion euros, 11,510 employees, and revenue of over 3 billion Euros, 84% of which is earned abroad, mainly in the USA, Canada, Eastern Europe, Turkey, Latin America. This global presence is also the result of a process of continuous innovation and investment in training, which help the company to face major design and implementation challenges, whether in Italy or abroad. The numerous completed projects, which frequently represent the perfect combination of form and function, include the Third Bosphorus Bridge, the longest and widest suspension bridge in the world; the Rho-Pero Exhibition Centre in Milan, the modern symbol of Italian excellence, designed by Massimiliano Fuksas; the Toledo Metro Station in Naples, widely recognised as the most beautiful and spectacular in Europe, realised in collaboration with Oscar Tusquets Blanca, and the Naples-Afragola high speed rail station by Zaha Hadid. Current and future projects include works on the ELT (Extremely Large Telescope) in Chile, the largest optical telescope in the world, while in the United States, the company is responsible for one of the most important public works in California, namely the construction of a section of the Interstate-405 in Los Angeles. 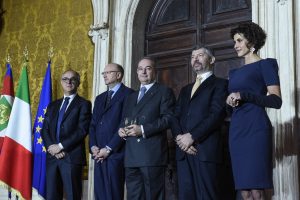 Founded in 1948 in Lesa, on the mouth of the river of the same name where it flows into Lake Maggiore, Herno has carried the flag of Made in Italy excellence for 70 years, evolving continuously over that period: from the first raincoats produced during the immediate post-war period, through collaborations with high fashion brands during the 1980s and 1990s, to today’s extensive range of clothing, Herno is synonymous with urban outerwear in the world of modern fashions. Since 2005, when the new generation in the person of Claudio Marenzi, took over the company, much of the efforts were concentrated towards international growth, working to enhance the family brand through constant investments in research, technology, and eco-sustainability projects, such as the design and production of the first European garment with the Made Green certification in Italy. All this, of course, is combined with just the right dose of sartorial tradition. Today, Herno boasts a turnover of almost 100 million Euros, 70% of which comes from international sales, and profitability of around 15%, in addition, the company employs 170 people at the Lesa headquarters and more than 800 people at its production plant in Sicily, where the double cashmere is produced. Never one to rest on his laurels, Claudio Marenzi, the  former President of SMI and current president of Confindustria Moda and Pitti Immagine, continues to work with unremitting determination on the renewal of the production processes, with the result that the company has become a pioneer in the introduction of increasingly high-performance fabrics, which it marries with the use of the extraordinary resources provided by Italian-made fabrics to achieve the perfect balance between innovation and tradition. 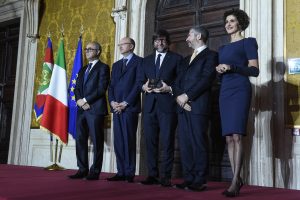 In 1968, Ciro Paone established the Kiton brand in Arzano, in the province of Naples, with the ambitious goal of establishing the elegance and beautiful nature of high Neapolitan tailoring on the international market. At Kiton, everything revolves around the quality of the fabrics, which represent an authentic source of research and inspiration that offer the maximum expression of style, whatever the season. For this reason, Kiton garments are produced exclusively using natural fibres, for high-quality hand-made clothing, in order to respect the delicacy and refinement of the fabric. For example, the Kiton jacket may be considered an authentic sartorial art work. Not surprisingly, the manufacturing process involves 25 different people and takes a total of twenty-one hours to complete, in fact, the factory produces just 85 units per day. Craftsmanship is an art, a process involving both method and dedication in which every single detail has a distinct role to play. In 2009, Ciro Paone’s company purchased a woollen mill, enabling it to experiment with patterns, textures and new combinations of natural fibres to produce unique yarns, colours, and weaves. Yet the value of Kiton excellence goes beyond its craftmanship. In 2000, Kiton’s Haute Couture School was established in order to safeguard its world-renowned sartorial culture, whilst ensuring the continuity of a timeless tradition. Today, Kiton is an established business with 800 employees, 53 flagship stores in over 20 countries, and plans to open a large number of new shops over the next few years. 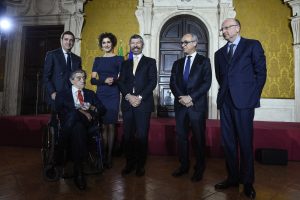 Founded in 1935 by Gaetano Marzotto, Santa Margherita Gruppo Vinicolo unites ten different estates in some of the most beautiful wine-producing regions in Italy: Eastern Veneto, Conegliano-Valdobbiadene, Trentino-Alto Adige, Lugana, Franciacorta, Chianti Classico, Maremma, Sicily and Sardinia.  In fact, it is one of the most important players in the Italian wine industry, selling approximately 20 million bottles a year in 90 countries. In addition, Santa Margherita Gruppo Vinicolo is also a significant innovator within the context of the Italian wine-producing sector, leading a global transformation in wine tastes, whilst driving the resurgence of Italian production after its collapse in the 1980s. Santa Margherita – the Group’s homonymous winery – and the creative genius of its founder are responsible for the Italian reinterpretation of Pinot Grigio, which has changed global wine lovers’ sentiment towards this variety. More importantly, this newly-created production philosophy has grown uninterruptedly since 1961, opening up global markets to many Italian wineries. Moreover, since the early 1950s, Santa Margherita has been in the forefront of the development of sparkling Prosecco, as we all know it today: one of the most overwhelming successes of Made in Italy in the world. Over 80 years since its foundation, Santa Margherita is now a wine production powerhouse throughout Italy, with a direct presence in the United States through its subsidiary Santa Margherita USA, Inc. Santa Margherita Gruppo Vinicolo also confirms its leading role in the Italian wine landscape through a relentless attention to environmental sustainability: from the total power self-sufficiency of the Fossalta di Portogruaro headquarters, to the fight against fresh water waste; from the patents filed for sparkling wine bottling processes that reduce the use of sulphites, to the growing techniques designed to eliminate the use of synthetic chemical products in over 50% of the vineyards under the group’s management; from the commitment to protect the landscape to reforestation efforts. 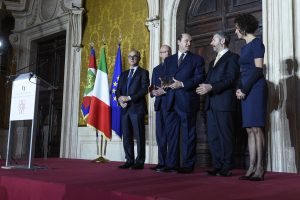