Diego Della Valle was born in Casette D’Ete di Sant’Elpidio a Mare on 30 December 1953. After studying law and then working for a time in the United States, in 1975 he joined his father in running the family firm, where he learnt high-quality craft manufacturing techniques. Together with his father and brother, he promoted the creation of new product lines and brands that have been the hallmark of the company’s growth and success as an international benchmark. In October 2000 he became chairman and CEO of Tod’s Group, which is listed on the Milan Stock Exchange and is currently a global player in the high-end luxury fashion sector, with the Tod’s, Hogan, Fay and Roger Vivier brands. Together with his brother Andrea, he’s a shareholder in Unicredit, RCS, Sak’s, Piaggio, LVMH, Cinecittà, Fondo Charme and ACF Fiorentina football club. He’s been on the boards of directors of leading companies, including Ferrari, RCS and Assicurazioni Generali. Diego Della Valle is a member of the support committee of the Umberto Veronesi Foundation and president of the non-profit Della Valle Foundation. In 1996 he was awarded the Order of Merit for Labour and in 2000 he received an honorary degree in economics and business from Ancona University. During his brilliant career as an entrepreneur, Diego Della Valle has helped to spread Made in Italy’s values of quality and culture around the world. 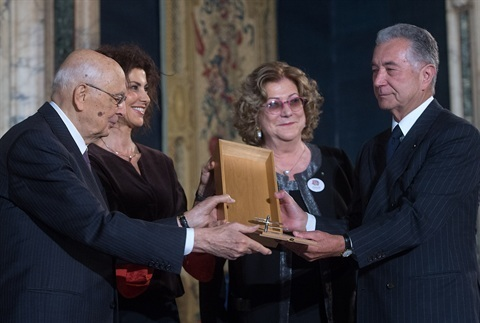 Gianni Zonin is one of the leading entrepreneurs in Italy’s wine-producing sector. He has a diploma in oenology and a law degree, and from a very young age helped out with the family firm, which has made wine for seven generations and maintained close ties with the local area and its traditions. When Casa Vinicola Zonin became a public limited company in 1967 he was named as its chairman at only 29 years of age, becoming a driver of steady and rapid corporate growth. Ten large estates were soon acquired in Italy’s seven most prestigious regions for the production of high-quality fi ne wines, as well as the Barboursville estate in the United States. The Zonin estates currently include around 4,000 hectares of land, of which 2,000 are planted with vines. He was the first wine entrepreneur from northern Italy to acquire vineyards and estates in Sicily and in areas with a Mediterranean climate. In 1989 he was awarded the Order of Merit for Labour. Since 1996 he’s been chairman of the Banca Popolare di Vicenza. Under his leadership the bank has grown in size and structure from being a traditional bank in the Vicenza area to become a national banking group, with subsidiary banks in the main Italian macro-regions.